It’s the weirdest soccer match I’ve ever watched. And it will probably stay so for a while. São Paulo FC against the Argentinian club Tigre, the final of the Copa Sudamericana, the second most important club tournament in Latin America. São Paulo won: in 45 minutes…

Let’s start at the beginning. Through some Brazilian friends we managed to get tickets for this important match. A unique chance, because you don’t always have the oppurtunity to attend the final of an important soccer tournament. The atmosphere was great, and the Brazilian supporters were really excited. With over 67.000 spectators, the Morumbi-stadium in São Paulo was bursting at the seams.

Explosion
In the first half São Paulo managed to score twice. Both times it caused an enormous explosion among the fans. People were smiling, singing, dancing, jumping. The noise was deafening. And even I got some tears in my eyes.

After those two goals the atmosphere was even better than before. ‘O campeão voltou’, or ‘the champion has returned’ the fans were singing already from the stands. Maybe a bit premature, but hey, the Brazilians are optimists, especially when it comes to soccer.

Firearms
But in the meantime the game became nastier. Especially at the Argentinian side there were a few serious offenses in a short time. And when the referee blew the whistle, the shit really started. What happened exactly on the field and particularly outside of it is still unclear. I only saw that a few players seemed to start fighting with each other, and before I knew it the whole field was full of players, officials and security guards. After a few minutes everyone was directed off the field and it seemed like everything was calm again.

Fireworks
And then, 30 minutes after the second half should have begun, there was suddenly the sound of the whistle. Around me everyone started cheering. And I understood that the decision had been made: São Paulo had won. The area where the supporters of Tigre had been was empty in no-time, while the fireworks for São Paulo were set off. I thought the whole situation was quite bizarre, but it didn’t seem to matter at all for the fans of São Paulo. Completely excited they ran across the field. It was one big chaos.

If this is what we can expect during the World Cup in 2014, it will be very interesting… 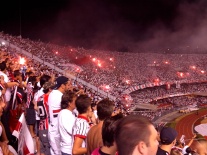 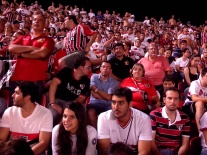